Drag ON! takes over Dundas Square on July 2nd starting at 2pm, as Pride Toronto serves up a ferocious sequel to last year’s over-the-top and overwhelmingly successful event. Be a part of drag history as DRAG ON! snatches the official Guinness Book of World Records title for Largest Drag Stage Performance.  Featuring the fiercest looks and freshest routines of more than 50 of Toronto’s reigning queens, kings, and other gender-benders, with  a backdrop of dramatic beats by Britney Spears impersonator extraordinaire Derrick Barry (RuPaul’s Drag Race, X Factor) Co-hosted by legendary lovelies, Lady Bunny and Bianca Del Rio.

theBUZZ asked one of Toronto’s newest scene queens, Boa, to grab a few words with some of the performers who will be strutting their stuff on stage at this year’s event.

Boa – Tell me about yourself! How did you get your drag name? What type of style would you say that your drag is? Etc

Donnarama– I’m an Italian supermodel born and raised in Toronto, I’ve been performing since I was 17 so I must’ve looked awful cause no one ever I.D’d me.
My style of drag is comedy and being spontaneous. I enjoy creating artistic ideas so I use alot of visual imagery and props. My name came from an on the spot moment when I was entering a drag contest for the first time. I remember Chris Edwards who was hosting that night came up with it, thankfully or I’d be “Harry Debbie” which I thought was funny and a nod to Blondie. I also called myself “DonnaRoma” cause sometimes i didn’t shave my pits. Very European.

Donnarama– The general meaning of Pride to me is conglomeration of politics, parties and purpose. Whether you seek to be an active voice on opinion and change or celebrating your freedom or hope of it. It’s a conglomeration of so many aspects of LGBTQ spectrum showcased, celebrated and debated. I find Pride to has a balance of both political and celebratory importance.

Boa – How do you plan on celebrating Pride, this year?

Donnarama– This is a busy time so getting everything done is my focus! Lol I’m happy and lucky to be alongside so many people I adore and admire so it’s both work and pleasure.

Boa – We’ve been seeing a lot of hype around Toronto pride’s “Drag ON”! What would you say that you’re most exited for at “Drag ON”?

Donnarama – Drag On is going to be huge event and it’s so cool it’s at Dundas Square, I’m really looking forward to it. I hope it’s going to be one if those memories like when you watch Truth Or Dare and Madonna comes out on stage in Japan and everyone roars and goes crazy, though I think in the film her voice over is like, “it’s f@#!ing raining!” I’m excited to be part of it because it’s a fun and ambitious spectacle.

Boa – What types of themes or artists would you say has inspired your “Drag On!” performance the most?

Donnarama – I’m teaming up with Sofonda Cox for the performance who’s such an incredible drag artist and she likes to take things to the next level, I love working with her. Our theme is something classic and out of this world!

Check the official Drag ON! Facebook Page for the latest schedule of performers and performance times. 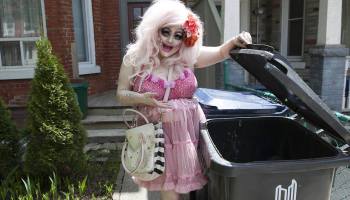 Drag ON! with Dottie Dangerfield

Drag ON! takes over Dundas Square on July 2nd starting at 2pm, as Pride Toronto serves up a ferocious sequel to last year’s over-the-top and overwhelmingly successful event. Be a part of drag history as DRAG ON! snatches the official Guinness Book of World Records title for Largest Drag Stage…

Boa (Bitch on Arrival) is one of Toronto's youngest performing drag queens! Starting off in the industrial city of Windsor and moving to Toronto in 2014 to fulfill her drag career; Boa has really made a name for herself.