It was reported on January 12th that Superstar DJ Keoki has been arrested for drug possession stemming from an incident where NBC producer Thomas Felty was found dead a few weeks back in a New York City apartment. Keoki is still reportedly in jail, and while friend Patrick Walsh was also charged with the same offence, he has since been released on bail.

Keoki’s other party buddy, Michael Alig, was found in a similar situation in the late 90s, and went to prison to serve a murder sentence. After Keoki’s arrest, Alig tweeted that his friends are “being arrested in connection to the accidental fatal overdose of a friend in Colby’s apartment. Colby and Keoki are being charged with drug possession”. Walsh is a NYC model that goes by the full name Patrick Colby Walsh, while Keoki was arrested under his real name, George Lopez.

Both Alig and Keoki were the focus of the 90’s NYC party club scene film, Party Monster, that chronicled the arrest and imprisonment of Alig. Since Alig’s release he’s been back in the public eye with a web series, and book release, The New York Post were the first to report on both the Alig and Keoki charges.

Now, both Alig and Keoki are appearing together in the upcoming world premiere of “Scumbag” (World Domination Pictures, Inc). Interesting to note that the plot revolves around “a hipster superstar DJ wannabe who has a day job working with mental patients, ex-prisoners, drug addicts and murderers.” Keoki plays a gutter punk telemarketer named Javier who makes extra money on the side doing Guinea Pig drug testing. Alig plays a Prozac-addicted nerdy straight boss named Cody who is secretly having an affair with his secretary Lydia (played by Penny Arcade). He runs a fraudulent telemarketing company run by his older brother Robert (played by Tom Silverman, aka “Tommy Boy” from Tommy Boy Records) who publicly hates him. 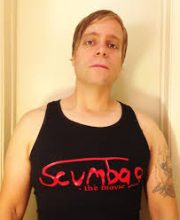 Director Mars Roberge has known Keoki for years, from their club days of DJ’ing together. He commented, “Keoki did a great job acting in the movie (even better than the actor who played him in Party Monster), but now he’s going to miss the sold out world premiere at the International Film Festival Rotterdam (IFFR) on February 2nd . Let’s hope he makes the North American premiere at Queens World Film Festival on March 18th.” Going with the initial concept for the film, it seems that all formulas are broken and we are breaking free from corporate dictatorship, taking cool back to the streets. The film represents the US in the punk section of IFFR, and is looking like it could directly relaunch a hardcore punk movement in America in conjunction with the current move in politics. The film was one of only four American-produced films premiering out of the thousands of submissions received.

“Scumbag” is the first feature narrative by the Canadian-American director Roberge, who was born in Toronto, and is now based in Los Angeles. The story takes place circa 1990s. Phil, a hipster superstar DJ wannabe, takes on a day job at a telemarketing company working with mental patients, ex- prisoners, drug addicts and murderers. The time on his life begins to tick as he battles addiction, fights the law and society, all while trying to maintain the only sane thing left in his life, his girlfriend. The cast also includes a mishmash of personalities from America’s underground scene, with the likes of Goddess Bunny, Soigne Deluxe, Gregory G-Spot Seibel, Michael Musto, Grinell-Skot Gilmore, Ron Jeremy, Nina Hartley, Monique Parent, Patty Powers, and Tim Truman.

“Scumbag” is screening at IFFR as part of “Perspectives – A Band Apart”. As Punk turns forty years old, it takes on new forms, bringing disorder and enlightenment to today’s society with radical measures. This program picks contemporary films with the same punk energy, and is about fringe and splinter groups and individuals (A Band Apart), who are impacting public space and lives through rebellion, performances, and music. From West to East, from funny pranks to more violent means, from non-sense to terror. This is angst and anxiety to be played at maximum volume.

In addition to “Scumbag”, Mars has previously directed the award-winning “The Little House That Could”, documenting his time spent working in New York City for Patricia Field, who is best known as being the lead designer on the hugely popular “Sex in the City” television series. As well, he’s directed two new music videos with clips from the film:

“Scumbag” will also be playing Philadelphia Independent Film Festival in April as well.

Bryen Dunn is a freelance journalist with a focus on travel, lifestyle, entertainment, and hospitality. He has an extensive portfolio of celebrity interviews with musicians, actors, and other public personalities. He enjoys discovering delicious eats, tasting spirited treats, and being mesmerized by musical beats. Reach out - bryen@thebuzzmag.ca