Our main feature is with Australia’s drag superstar, Courtney Act (Shane Jenek), who recently released a tell-all memoir appropriately titled, Caught in the Act, that includes details on growing up down-under, to making it on RuPaul’s Drag Race, and hosting television shows. Our second feature is with famed Hollywood talent, Patricia Resnick, who wrote the original screenplay for classic film, 9 to 5, and continues to work in the industry today with recent credits including HBO’s Mad Men, FX’s Better Things and Netflix’s queer limited-series, Tales of the City.

Our guest Wigged Out writer is Tifa Wine, who spoke with Bom Bae about how they incorporated politics and pushbacks into their appearance on RuPaul’s Drag Race. Cat Grant interviewed actor and filmmaker, Stacey Maltin, who recently released her first feature film, Triple Threat, a queer millennial love story. Boyd Kodak spoke with Jacklin Falconer, a professional stage conductor and Assistant Artistic Director with Singing Out Toronto. Rolyn Chambers takes a look at how drag queens are taking up space in the world of media, gaining major product endorsements and franchising opportunities. Sherry Sylvain spotlights the legendary queer-owned Ossington Street bar, Sweaty Betty’s, and also compiled our BUZZ Pick Event Listings of the very best the GTA has to offer.

Don’t have the Adobe Acrobat PDF reader?
Download it now.

… or view an older issue 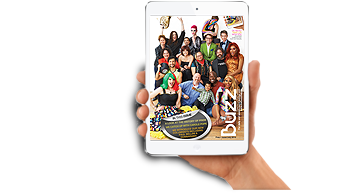 Download the latest edition of the theBUZZ as a PDF or flip through an older issue, everything is right here at your fingertips.