Documentaries can be curated experiences, and there is not necessarily anything wrong with that. Sweet Marie: In Studio With Erin Costelo is a documentary that offers a brief glimpse into songstress Erin Costelo’s artistic process as she attempts to churn out a record in only 10 days. See below for a Q&A with writer Erin, and director, Amelia.

Making art can be difficult. For many of us, we have that naysayer in our heads that…

Should you be writing like this? I don’t think you are a good film critic.

…has the potential to derail us, to stop us from setting on the path we originally trod upon.

Trod upon? You’ve never walked a mile in your life.

The critical voices in our heads and the lack of support from outside can really dampen our best efforts. Especially, if you are a woman – the targets of much sexism and intolerance in our society if this last year is any indication. The salve is in Erin Costelo’s courage to attempt a challenge for herself – to finish a record, Sweet Marie, in 10 days in an isolated, yet pretty ocean-side cabin in Little Harbour, Nova Scotia, with a tree growing through its centre.

Despite the cabin being isolated, she isn’t. Costelo assembled an ace group of Canadian players for the album, including Glenn Milchem on drums (Blue Rodeo), Anna Ruddick on bass (Randy Bachman), Leith Fleming-Smith on organ (Matt Mays, Hawksley Workman) and her long-time partner, Clive MacNutt, on guitar. Taking inspiration from sources as varied as Ryan Adams and Randy Newman, Costelo delivers a genre-defying batch of songs that sound at once timeless, timely and completely fresh. Costelo makes the point that you cannot be successful alone – support crew and fellow musicians (even if your partner is one) are all so important. It is refreshing to hear someone be so modest, yet, also you know that she is very talented.

For a 45-minute runtime, the film does the best it can, but it unfortunately cannot answer some of my biggest questions, such as what made Costelo decide to work and play with these individuals? I would like to learn more about them and what they bring to the table. There are shots in the film of the band talking and having fun, but we are not necessarily in the loop – even some of the stray lines we do get do not make full sense without having the whole context. 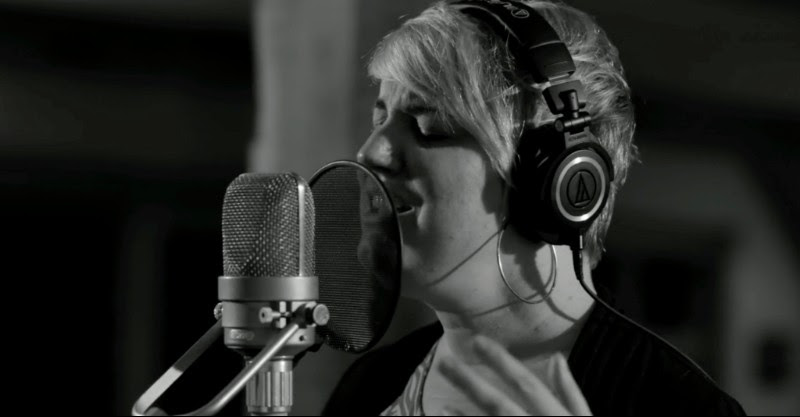 Costelo created the parameters of this 10-day challenge in order to motivate herself. But, would she have ditched the whole project if it wasn’t completed in 10 days? Why was she thinking that this record was her last? What makes her decide that a recording session is completed? How did the band sustain themselves through long work days? I could go on. It is the constraint and curation of the 10-day record challenge that only gives the viewer a small glimpse of what drives Costelo and her band.

That being said, if you like her tunes, and really feel the need for an uplifting message as we end this trash fire of a year and begin a new one, these 45-minutes are more than a necessary salve for our times. It is the beginning of a conversation.

How do you know that a song is done?

I’m not sure I ever know for sure. Sometimes there is a story and when the story feels complete then then it is clearer when the song is done.

Did you ever have any conflicts collaborating? How did you resolve that?

No conflicts from this end. Being in different provinces while organizing can be a challenge but we were always on the same page.

How do you describe your songs / music to someone who is deaf?

Hopefully like water on a warm day. Satisfying and refreshing?

Why 10 days to finish this record? Was motivation a factor for you?

I always took forever to make an album and I wanted a challenge. 10 songs in 10 days felt like a push creatively that I was needing.

How long has Sweet Marie been with you? Is she still helping you with your next record?

Haven’t started to work on the next record yet! But I hope she sticks around. She has always been with me, I think. The most confident version of myself. I have just been letting her out more!

How do you know that a song is done?

Being able to say a song is done is a constant little nagging in every songwriters life I think.  I want (admittedly romantically) for the song to dictate when it’s done, but not many of them do that.  Sometimes it’s done after I’ve chopped it up into bits and put half of it back together again.  Sometimes a bit of collaboration helps – a few extra sets of listeners.

Did you ever have any conflicts collaborating? How did you resolve that?

I think most of our conflicts were in the stressful period before shooting and recording began – all the minutia of this project made us a little crazy – how many cars did we need? Did we have enough beds?  Which project was paying for which tank of gas? It was all a bit hard on the head. But once everything was loaded into the house and the band started rehearsing, things began to roll pretty smoothly.

How do you describe your songs / music to someone who is deaf?

This is interesting and I admit I’m not sure – I’ve never been asked to! I would describe my music as seeking I guess – lyrically driven, contemplative, wondering.

Sweet Marie: In Studio With Erin Costelo, directed by Amelia Curran can be found on the CBC website and also Erin’s website.

Michael McNeely law student graduate, entertainment and accessibility critic; filmmaker; and aspiring actor. He enjoys meaningful representations of LGBT folks and those with disabilities in the popular media, and is waiting for the day where nuance, instead of stereotype and prejudice, is the norm. Michael is deaf-blind, meaning that he enjoys the presence of subtitles and other accessibility features.