Two cops, three crooks, eight doors, no waiting…. Unnecessary Farce is an award-winning stage comedy that combines all the elements of classic farce with a contemporary plot. In an economy motel room, an embezzling mayor is supposed to meet with his female accountant. In the room next door, two undercover cops are supposed to catch the meeting on videotape. But there’s some confusion as to who’s in which room, who’s watching the video, who’s taken the money, who’s hired a hit man, and why the accountant keeps taking off her clothes.

Unnecessary Farce received its premiere at the BoarsHead Theater in Lansing, Michigan on October 27, 2006, and has had over 240 productions to date – throughout the United States, Great Britain, Australia, Singapore, Switzerland (in a Swiss German translation), Iceland (in Icelandic) and Canada (in both English and French)

One should know the meaning behind this type of comedic acting before seeing this production. Acting and actions are often over-the-top, prolonged for the sake of effect. The entire cast pull it off well, quite literally, as many of them are scantily clad for most of the performance as well.

As the story opens, the stage setting is in a motel with a set of beds back-to-back, separated by a thin wall between. The hilarity ensues, as with most farcical productions, when there’s some fumbling and bumbling, mishaps and mistakes, and more doors opening and closing than a Walmart on Saturday afternoon.

Steve McKey (Eric) and Melinda Jordan (Billie) are at the centre of it all, as two fumbling police constables on their first real assignment. They want to impress their boss, but of course, things immediately go astray when Billie arrives in uniform for their undercover work, and Eric sleeps with Karen (Krista Barzso), the woman who’s working to help catch the Mayor (Jeff Burke) in a cover up scandal. Agent Frank (Duane Taylor) who is assigned to keep tabs on the Mayor, is anything but efficient in his duties, and suddenly ends up in mishap after mishap.

As with all good farcical productions, all ain’t what it seems, and this all comes to the forefront when the Mayor’s innocent wife Mary (Karen Shue), pops up at the motel looking for her husband. Oh yeah, we can’t forget the Scottish  hitman Todd (Michael Vidde), who can only kill while dressed in his kilt and playing the bagpipes. When he gets overly excited, his accent becomes unrecognizable English. Needless to say, with a cast of characters as quacky as this bunch, there’s never a dull moment in trying to figure out what happens next. Without ruining anything, never trust the innocent ones!

About Paul Slade Smith, the playwright…. 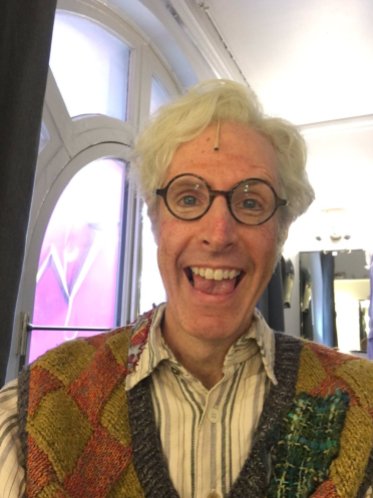 Smith is a writer and actor living in Brooklyn, New York. As an actor, Paul has appeared in Charlie and the Chocolate Factory, My Fair Lady, and Finding Neverland on Broadway, and national tours of Wicked and The Phantom of the Opera, and productions at American Repertory Theatre, Chicago Shakespeare Theater, The Goodman, Steppenwolf and Theatre Under the Stars.

His latest play The Outsider, opened just outside New York City in early 2018, described by one reviewer as “an insightful, witty satire about modern American politics. Funny, timely, and – dare we say – entirely possible.

“Farce, to me” says Smith, “is the purest form of comedy. It’s for people who like their comedies to never stop being comedic. It’s such an important part of theatrical tradition.”

About Katherine Bignell-Jones, the director…

There’s nothing Katherine likes directing more than a good fast-paced, door-slamming, witty farce. This will be the fourth consecutive season that Katherine has directed a play for Village Players’ audiences – following last year’s slapstick-in-rhyme The Liar, 2016-17 season opener Les Belles Soeurs, and the 2015-16 season finale Fox on the Fairway! In 2016, she also directed God of Carnage in the Toronto Fringe and Nana’s Naughty Knickers for Theatre Etobicoke. Other selected plays she has directed are Terror By Gaslight (Kanaidjun Entertainment), Killcreek (Bojit Productions), Bedfull of Foreigners, Too Many Cooks and Who’s Under Where? (Theatre Etobicoke), and Final Curtain (LaSalle Players).

Bryen Dunn is a freelance journalist with a focus on travel, lifestyle, entertainment and hospitality. He has an extensive portfolio of celebrity interviews with musicians, actors and other public personalities. He enjoys discovering delicious eats, tasting spirited treats, and being mesmerized by musical beats.